Sometimes it seems as if Mother Nature picks one color and runs with it. Recently that color has been blue. It's been everywhere I've looked, particularly here in the yard. Blue bugs, blue birds, blue flowers, blue berries...bright blue, dark blue, light blue...BLUE! In the interest of brevity, though, let's just concern ourselves with some of the bugs and birds.

Let's start with the dragonflies (all those pictured are males, the females show different colors)... 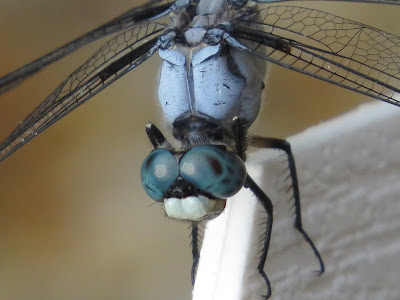 First up, the Great Blue Skimmer (Libellula vibrans)
As the name implies, this is a fairly large dragonfly, averaging between 2 and 2.5 inches. They are everywhere right now. They are particularly fond of the front porch for some reason. I like them because they are not camera shy. 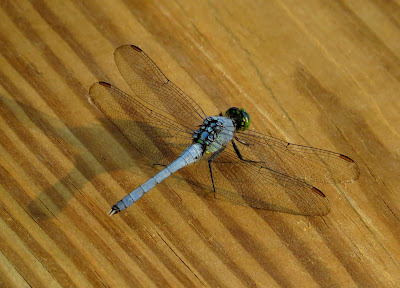 Next we have the Eastern Pondhawk (Erythemis simplicicollis).
I tend to think of these guys as the cats of the dragonfly world. If you're working on something outside, you are sure to have a visit from one of these. They love to "participate" in whatever activity is going on. Plus, they are not shy about landing on you. I've had them on my head, my arms, my legs, my feet...they just swoop in and make themselves at home. Like I said - cats. 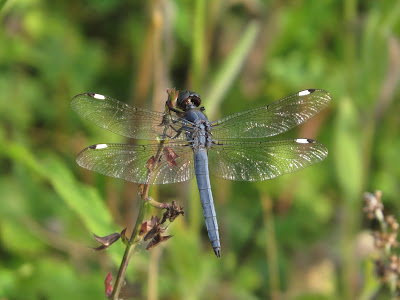 Now for some flash and dazzle, we have the Spangled Skimmer (Libellula cyanea).
Check out the black and white stigma on the wings. This is the only species in the East that sports such bling. It is a very noticeable feature whether the dragonfly is in flight or at rest. It will certainly catch your eye. 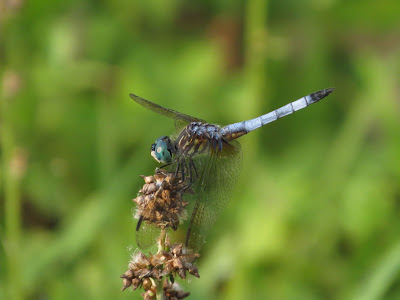 For spunk, you can't beat the Blue Dasher (Pachydiplax longipennis)
Males spend a good deal of time patrolling and chasing other males. When they do sit, they cock their wings forward in an attitude of readiness. And I love to see them obelisk on hot, sunny days. Obelisking is a behavior that helps a dragonfly in an open area avoid overheating. One will perch and then raise its abdomen up in the direction of the sun. This helps to reduce the amount of sunlight that hits the critter, keeping it cooler. It's a pretty neat trick. 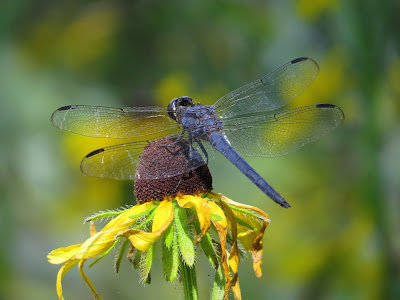 The darkest blue of the dragonflies in the yard is the Slaty Skimmer (Libellula incesta).
I often see these skimmers hanging out with the larger Great Blues. They have black eyes and very dark stigma that go quite well with their slate blue coloration. 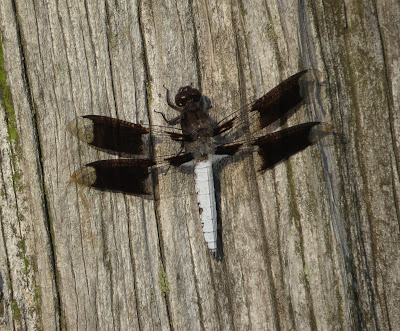 Some will argue that this last dragonfly is not blue at all. That's understandable considering that it's called a Common Whitetail (Plathemis lydia).
If you look closely, you'll see that the color is more a pruinose pale blue than white - at least to my eye. (Pruinescence, or pruinosity, is one of those terms that gets some folks' panties in a bunch when referring to odonates. Here I am referring to the sort of chalky look on the abdomen of this dragonfly.)

Now let's move to the blue birds that are around the yard. We have an abundance! (I was only able to get photos of two of the four species of blue birds that call our yard home. The Blue Grosbeaks and the Blue Jays were most uncooperative when I went out with my camera.) 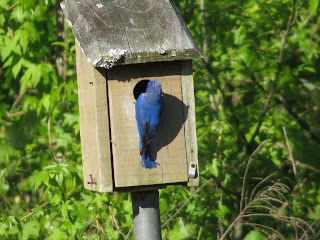 Most years we have multiple Eastern Bluebirds nesting on the property. This year only one box has been used, but two broods have been raised. Feisty creatures, bluebirds. I once watched one haul a Carolina Chickadee out of a box and wrestle it to the ground. The chickadee had first dibs on the box but the bluebird had an attitude. Such a bully bird! 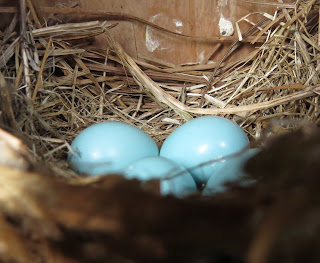 But they do have some pretty eggs :) 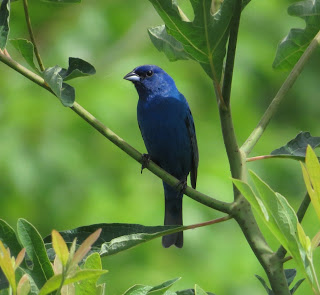 I dare you to find a bluer blue bird (in the East) than the Indigo Bunting. It's an electric blue when the sun hits it. We have at least four Indigo Bunting pairs raising broods on the property this year. The males sing their little hearts out.

There are other blue things out there but I'm out of time right now. Glad you stopped by!

Yes, you heard me. I said, "Back up!" And do it now. No excuses, no I'll-do-it-laters... So why am I preaching to you? Because I don't want you to go through the grief I'm going through right now. My laptop crashed...you know, the one with all my pictures? The pictures I like to share with you...the pictures that I can't get to until I pull the hard drive from my unconscious laptop and transfer the files.

Spring has been doing a two-steps-forward, one-step-back routine this year. Leaves have been slow to come out, flowers have bloomed "off schedule," and temperatures have bounced between downright chilly and downright hot. But it could be worse, so I won't complain (too much). 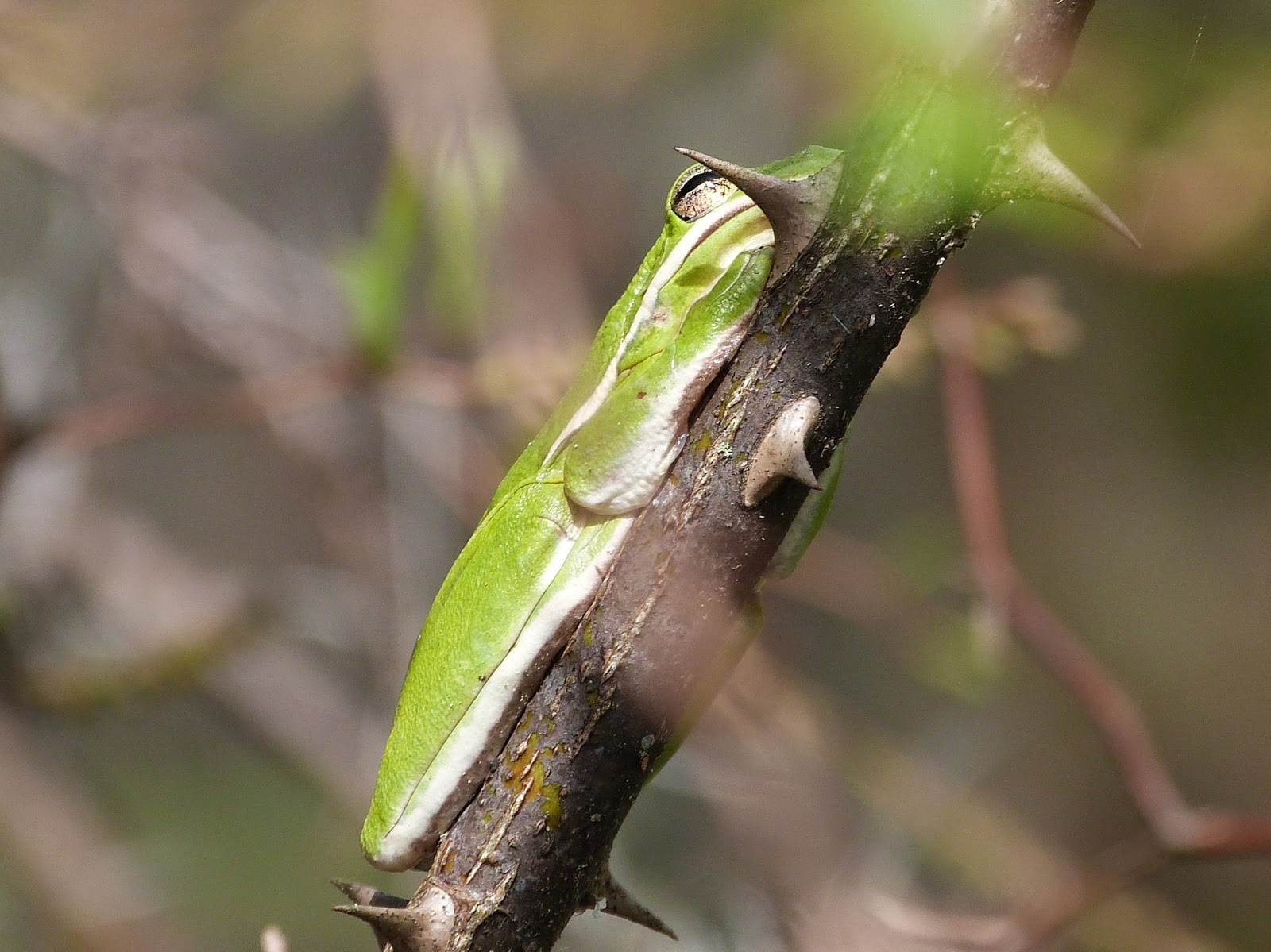 My first green treefrog didn't make its appearance until April 10th. I was beginning to go through withdrawal. Prior to the one pictured above, the only other green treefrog I had seen this year was a dead one under a log I rolled while looking for salamanders. 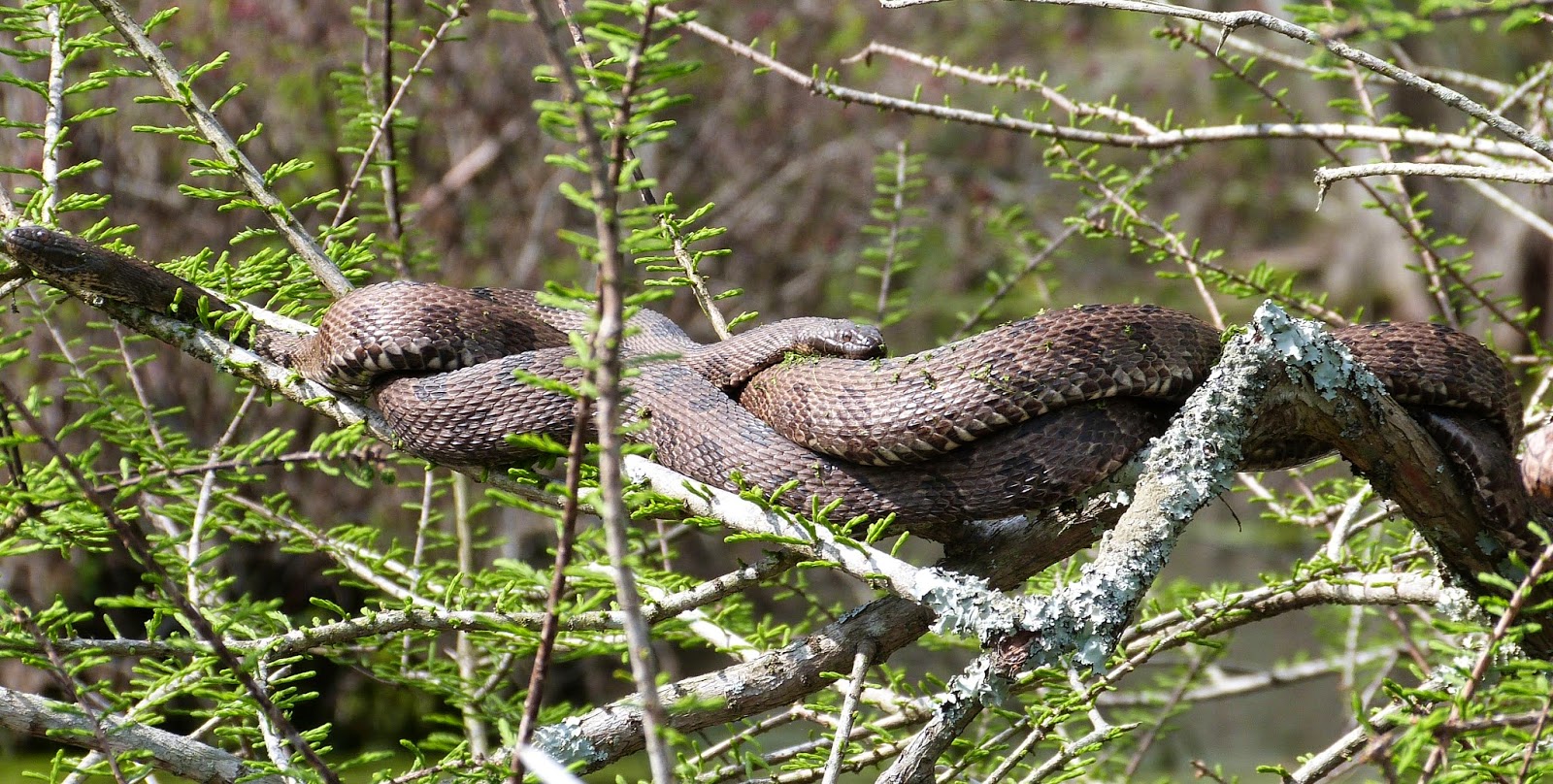 Brown Water Snakes have been scarce, too. We usually see them in March. This year they waited until April to make an appearance. There are at least two snakes in this picture, by the way. 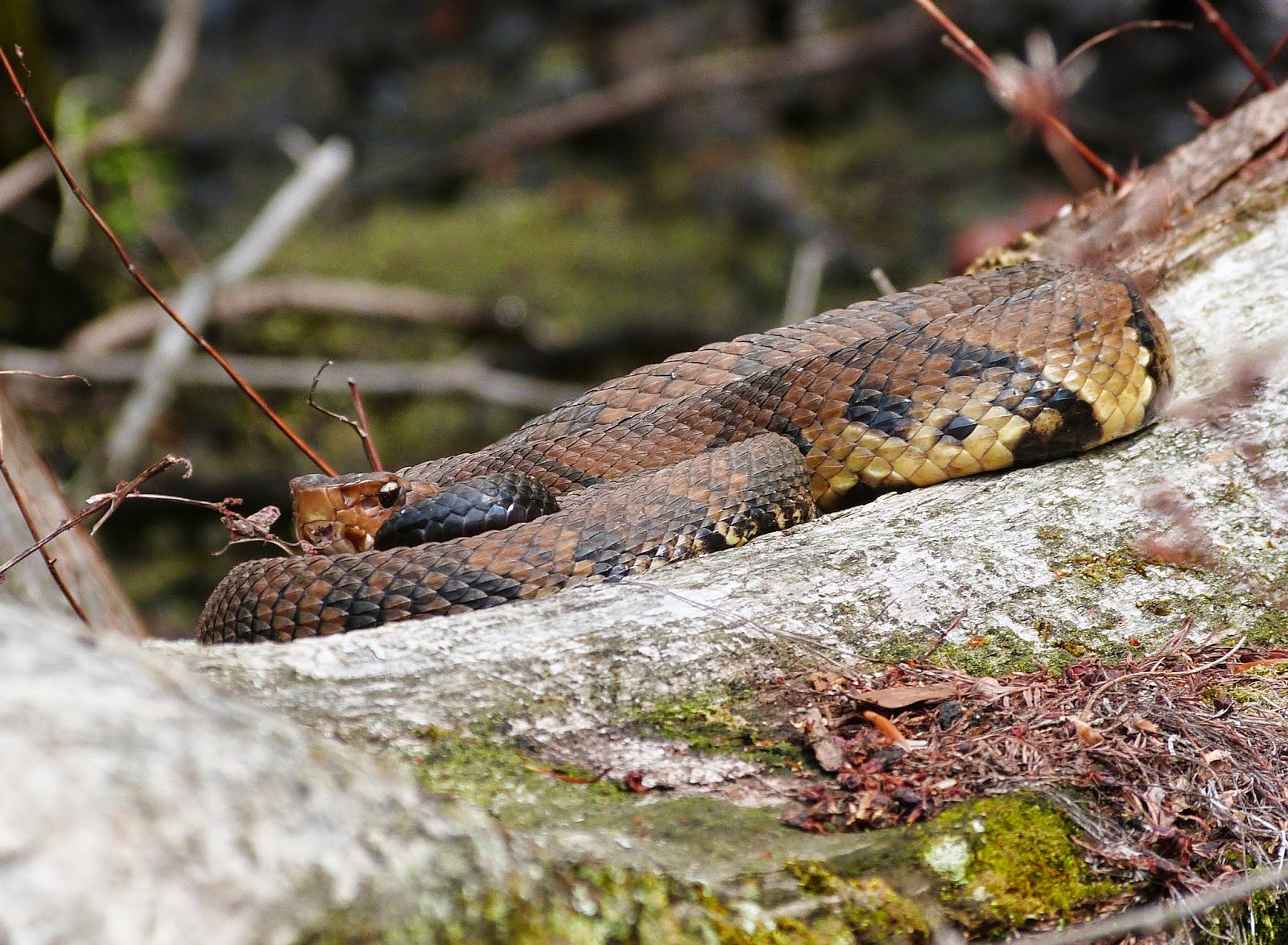 Cottonmouths are another story. We've been seeing them out since early March. 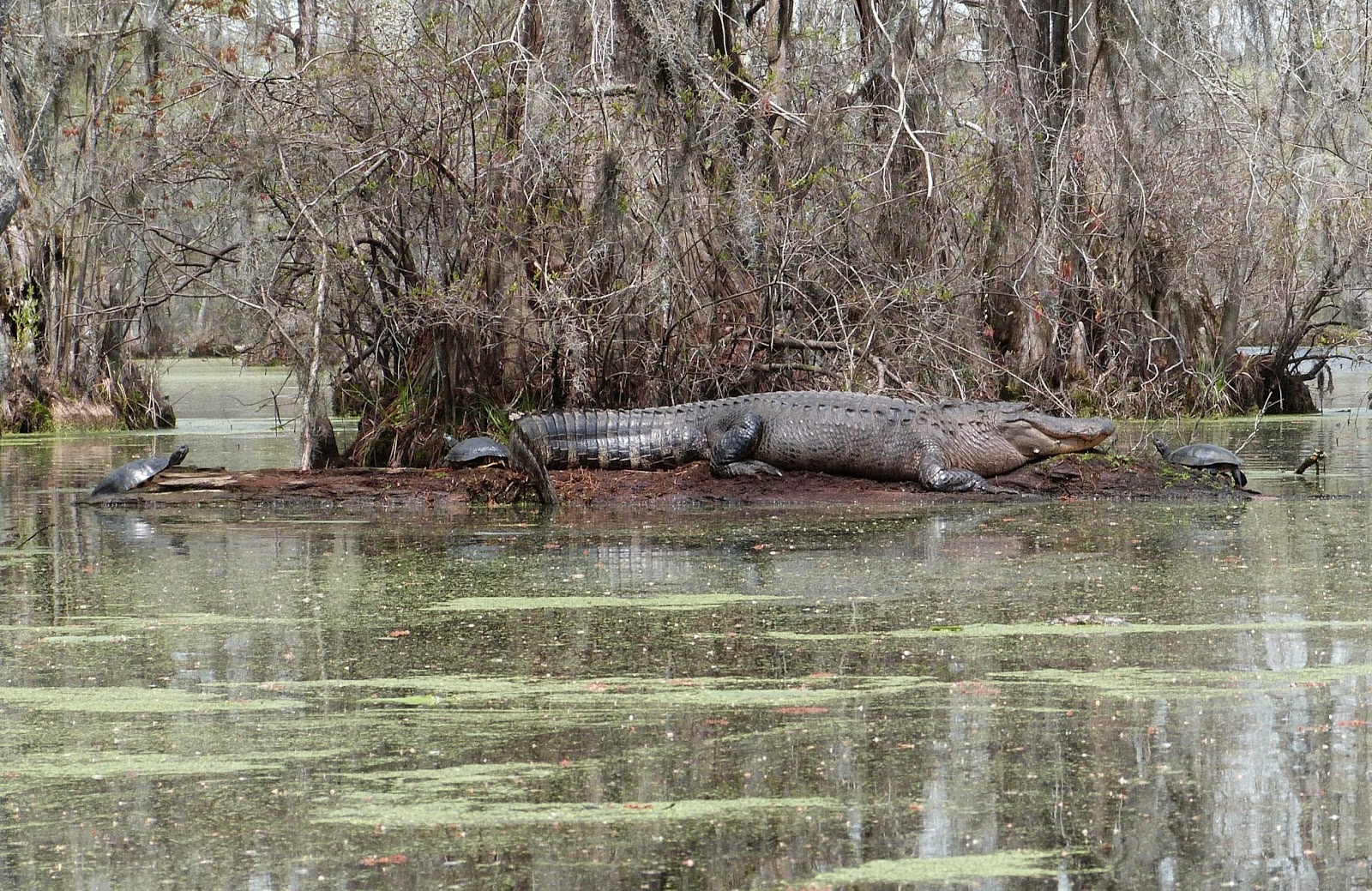 One of the gators has been napping on this log pretty regularly on warmish days. He doesn't seem too bothered by the unpredictability of this spring.
As for me and Floyd (aka Treebeard), we're going with the flow, hiking and paddling when the weather allows. We're keeping track of our FOYs (first of year) and looking forward to more consistent weather.  We're also looking forward to butterflies, dragonflies, amphibians, and reptiles...whatever Mother Nature sees fit to share. 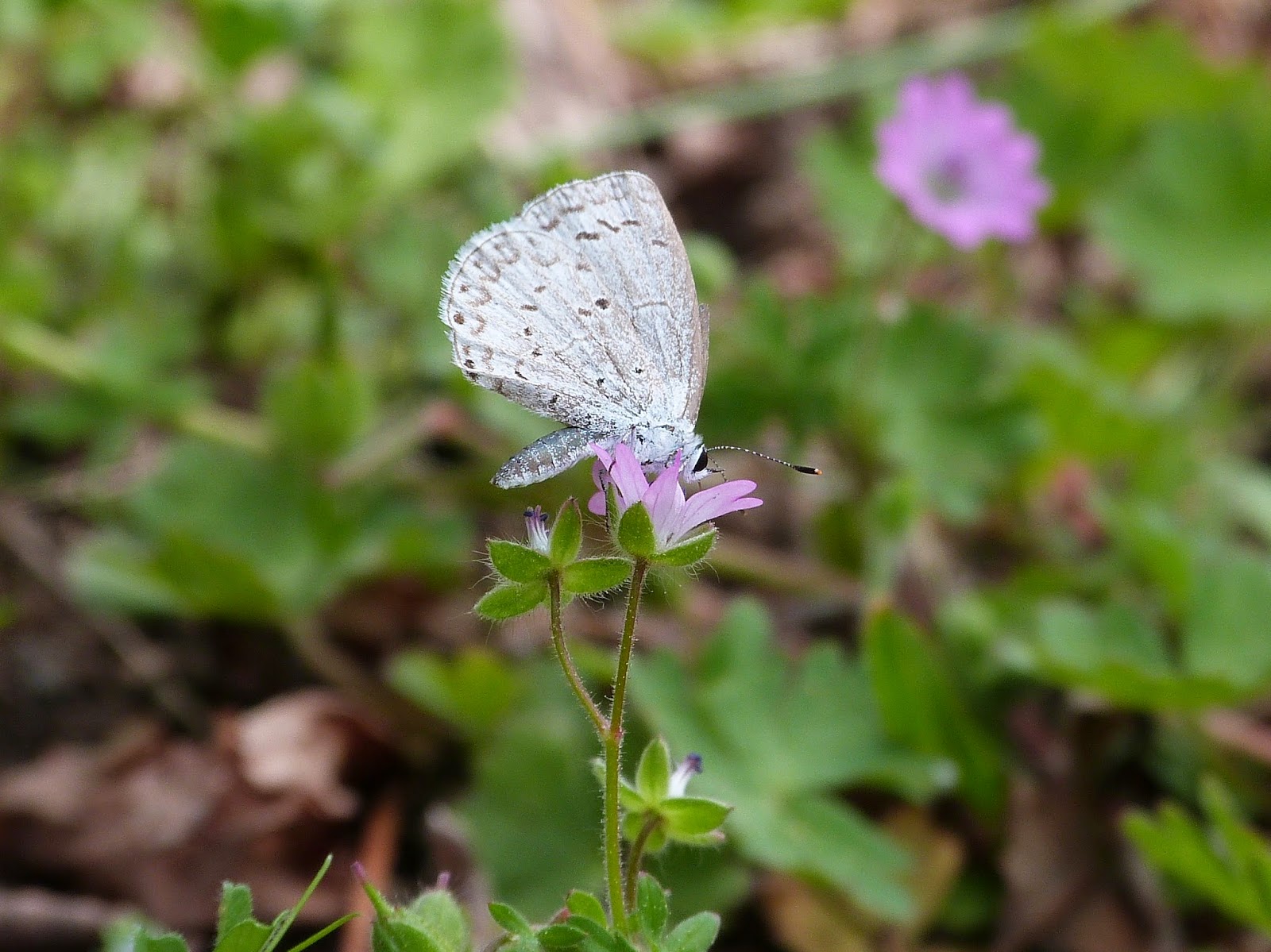 Wow. I don't even know how to use this site anymore. That's sad.
I should probably delete it, but I've had some good times here and "met" some fine people.
Maybe I'll hold on just a little bit longer...

We're riding a weather roller-coaster here in the swamp.  One day it's freezing cold, the next it's balmy and bright.  We experienced a couple of warm days in a row last week and of course took the opportunity to get out and see who and what was enjoying the respite along with us.

Our first stop was a hibernacula-rich area just down the road.  For those unfamiliar with the term, hibernacula is the plural form of hibernaculum.  It's a Latin word that translates (at least according to what I've read) as "tent for winter quarters."  So basically, it's just a sheltered place for an organism that is not active in the winter to hang out.  The hibernacula in our case shelter a variety of snakes over the winter.  Many people don't realize that snakes will emerge on warm, sunny days in the winter to do a little basking.  They are usually quite slow in there reactions when they first emerge, making them vulnerable to predation.  When we go looking for them we are careful to maintain our distance so as not to stress them out too much.  Zoom is a wonderful feature for a camera to have!

Okay, enough lecturing!  On to the pictures: 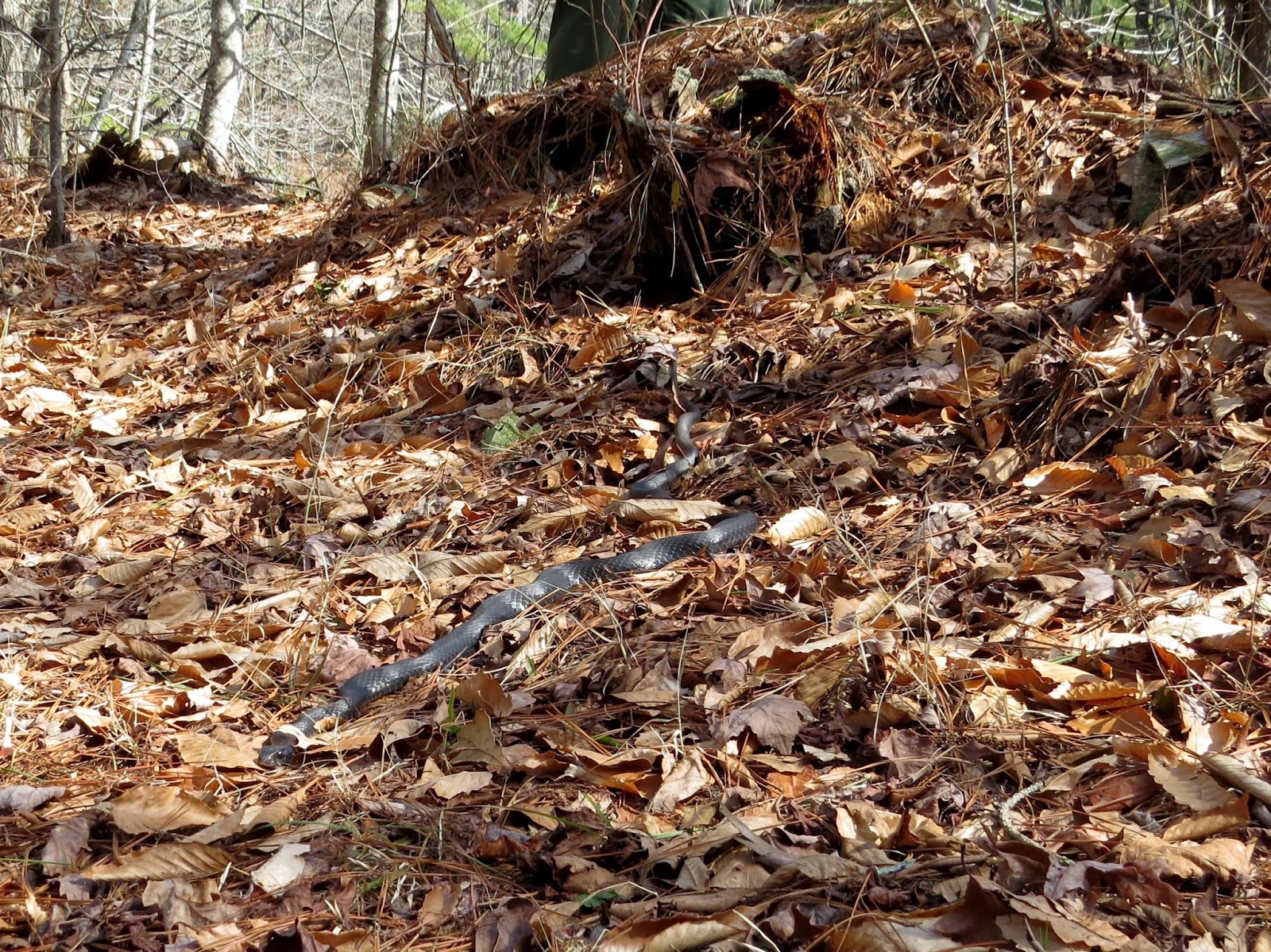 The snake is a Northern Black Racer, Coluber constrictor constrictor, and behind it you can see the hibernaculum from whence it came.  The shelter was formed by the root ball of a tree that blew over during Hurricane Isabel in 2003.  This particular area is dotted with numerous similar shelters.  One interesting note about Black Racers: they eat other snakes.  Perhaps this one chose its winter shelter with hopes of easy pickings come Spring. 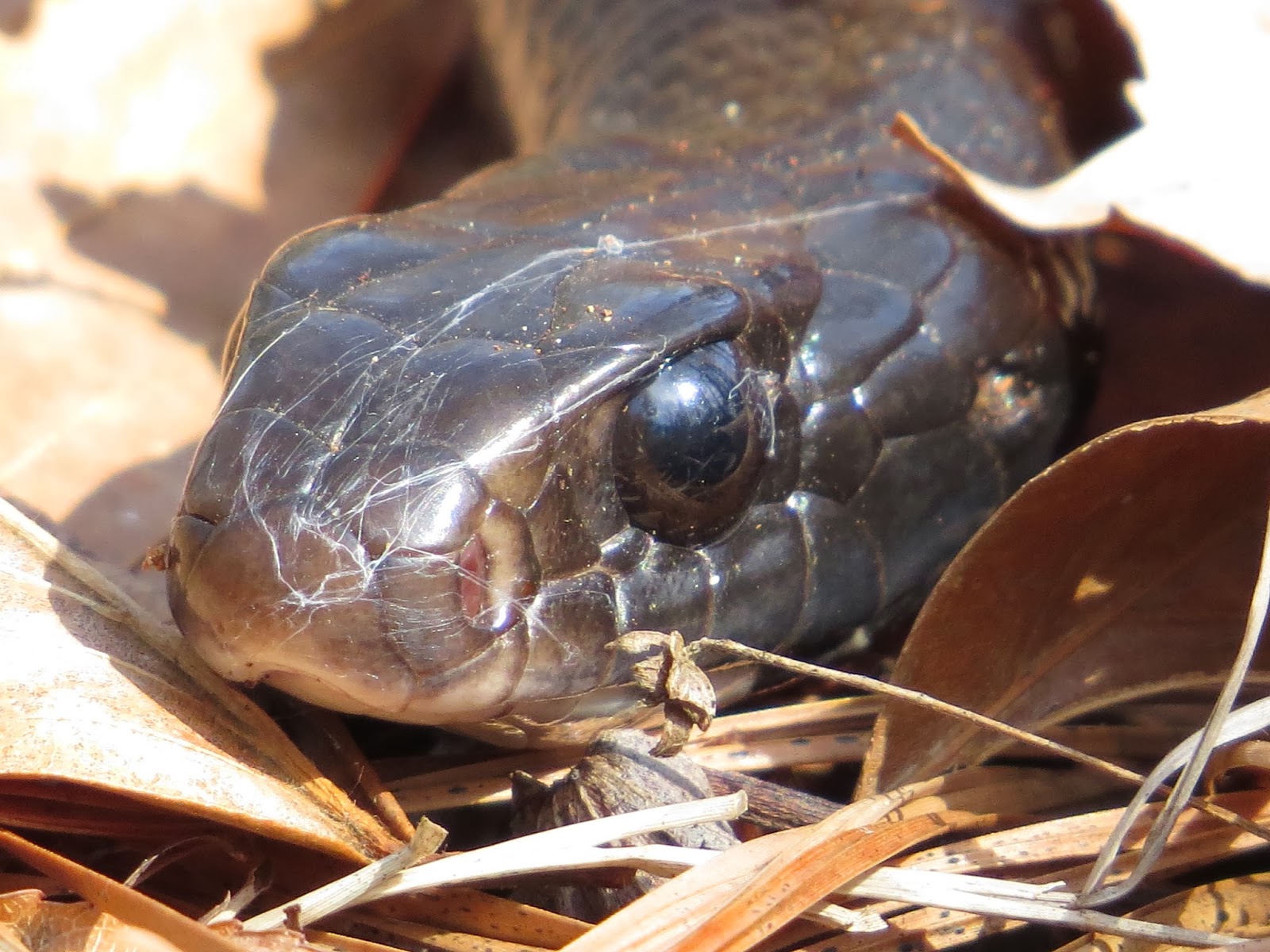 Here's a close up of the Racer's big, beautiful eye.  I don't often have an opportunity to zoom in quite so close on one of these snakes -- they are called "Racers" for a reason!

The Racer was our first snake of the year and the next photo shows our second. 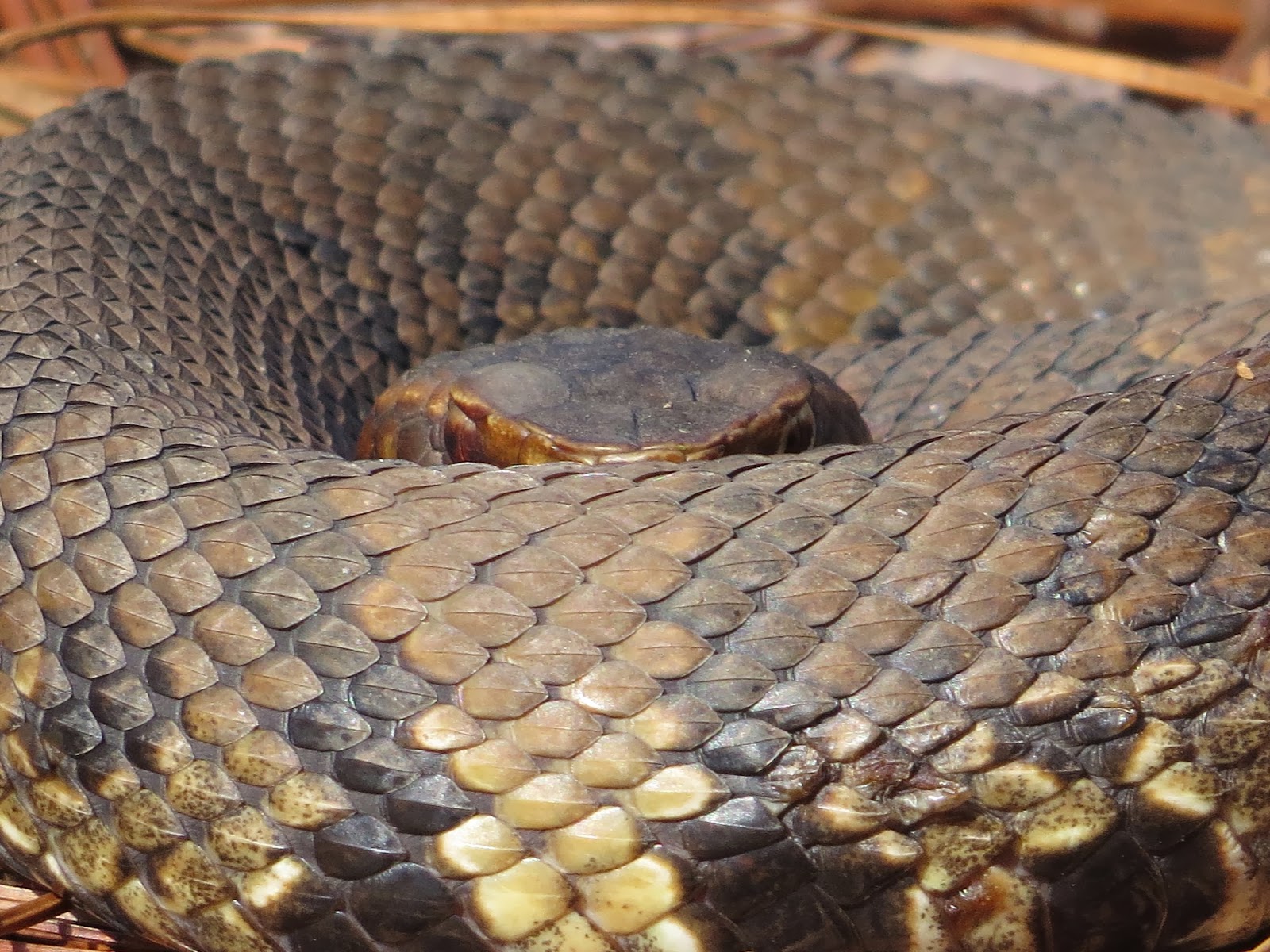 Our old friend, the Cottonmouth (or Water Moccasin, if you prefer),
Agkistrodon piscivorus piscivorus 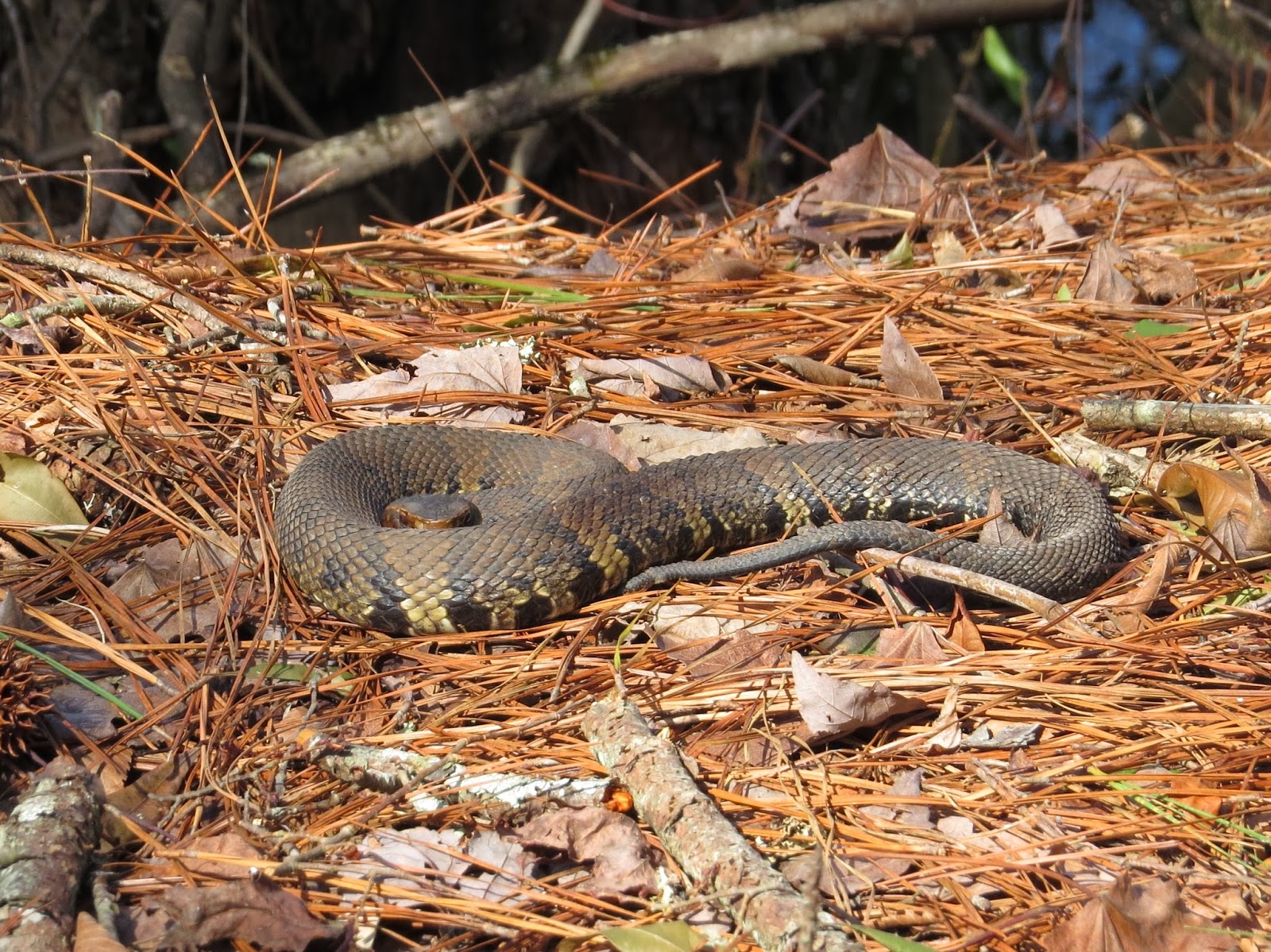 This is a venomous snake. If you find yourself in our neck of the woods, just be aware and allow this snake enough room for both of you to feel comfortable.  If you get too close, you will find out why they are called "Cottonmouths." If you don't heed their warnings, you may find out what their venom does. But I have discussed this species in numerous other posts so if you are interested, you can search the blog for more information.

As we headed out onto the pond in our canoe, we discovered that snakes weren't the only reptiles out and about on such a fine day in February. There were turtles out by the score. 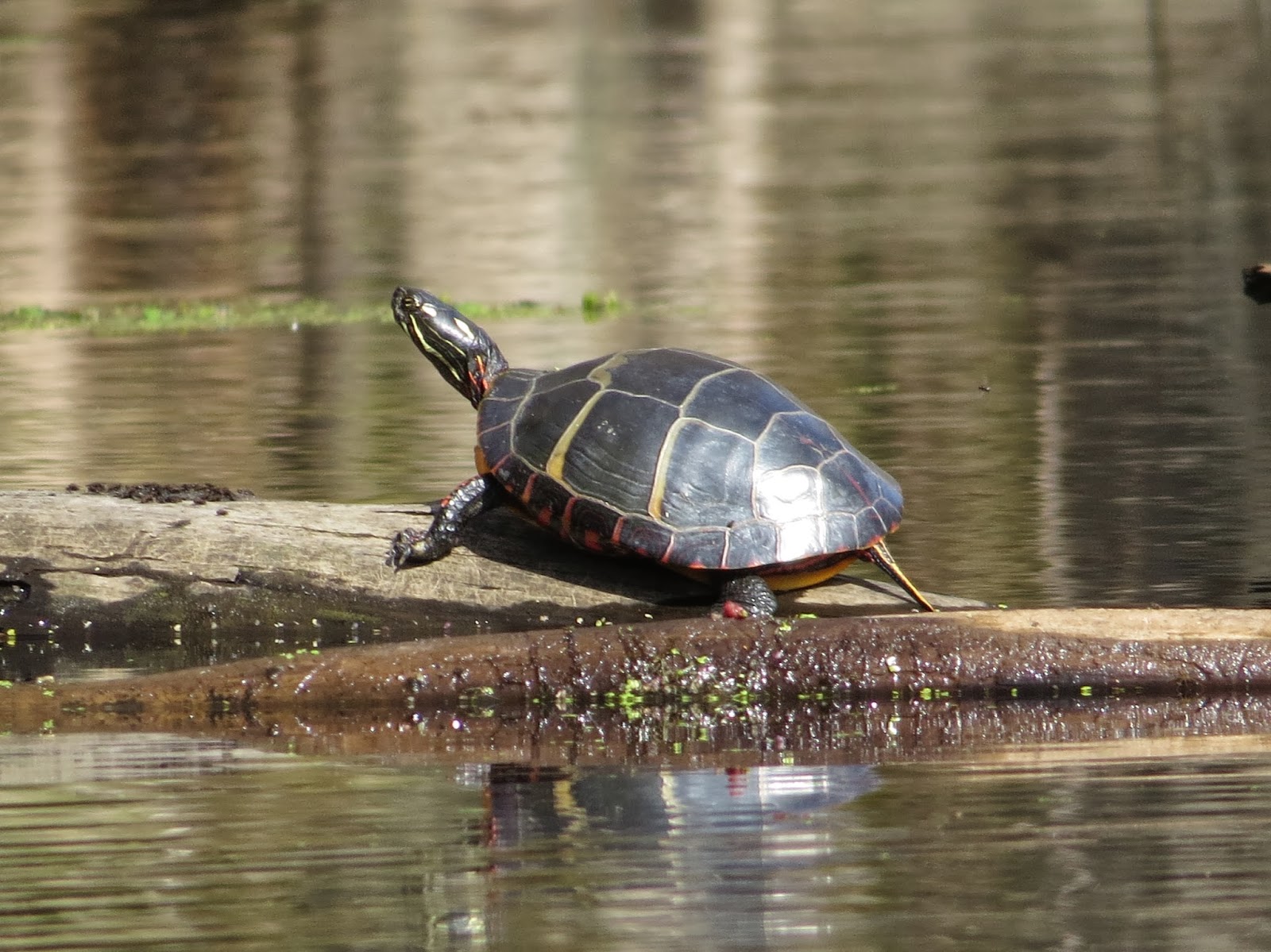 One little gut that we paddled into was full of Eastern Painted Turtles, Chrysemys picta picta .
I snapped photos of  four of them as they soaked up the rays. 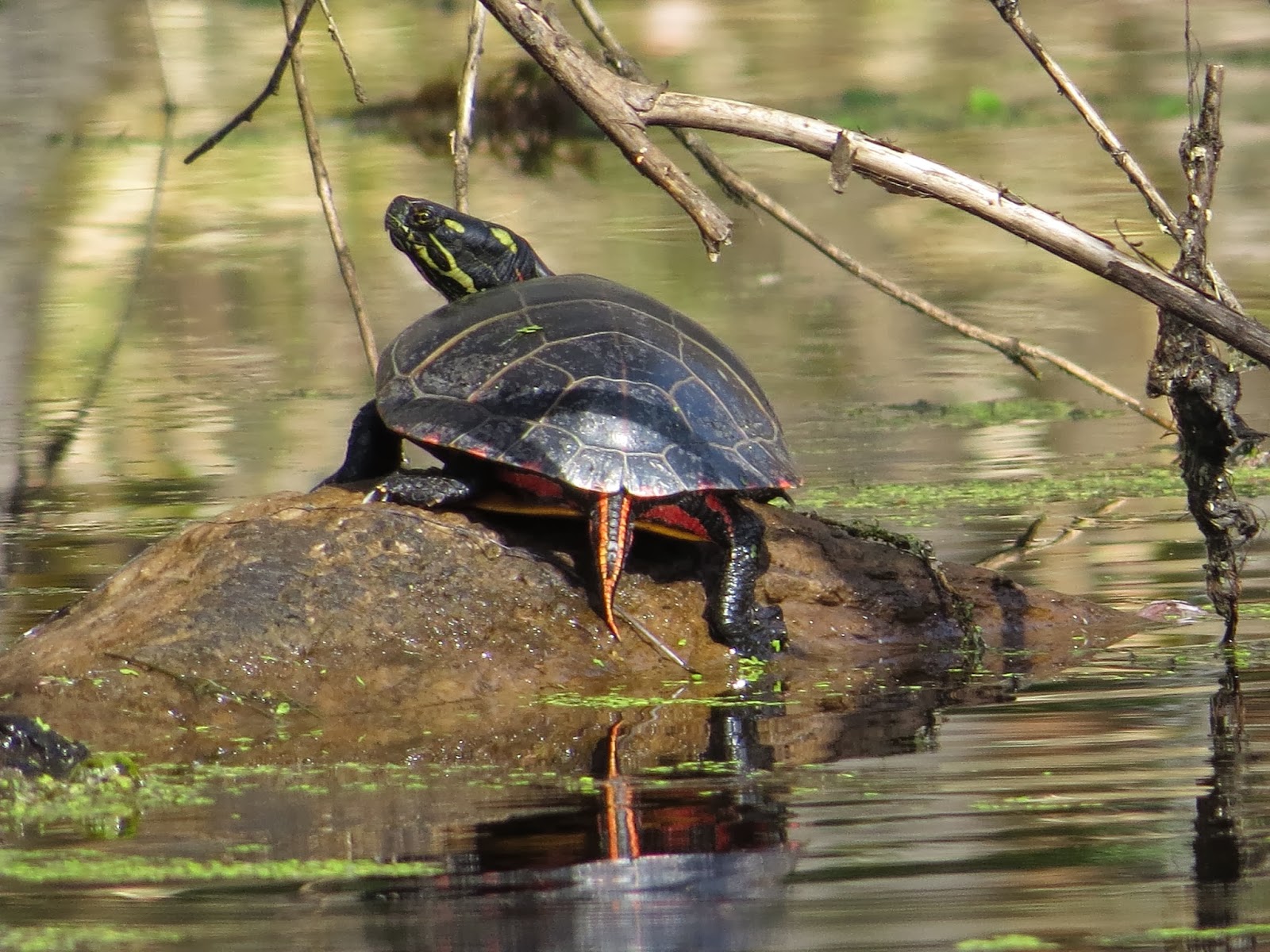 I love the red on the tail of this one. 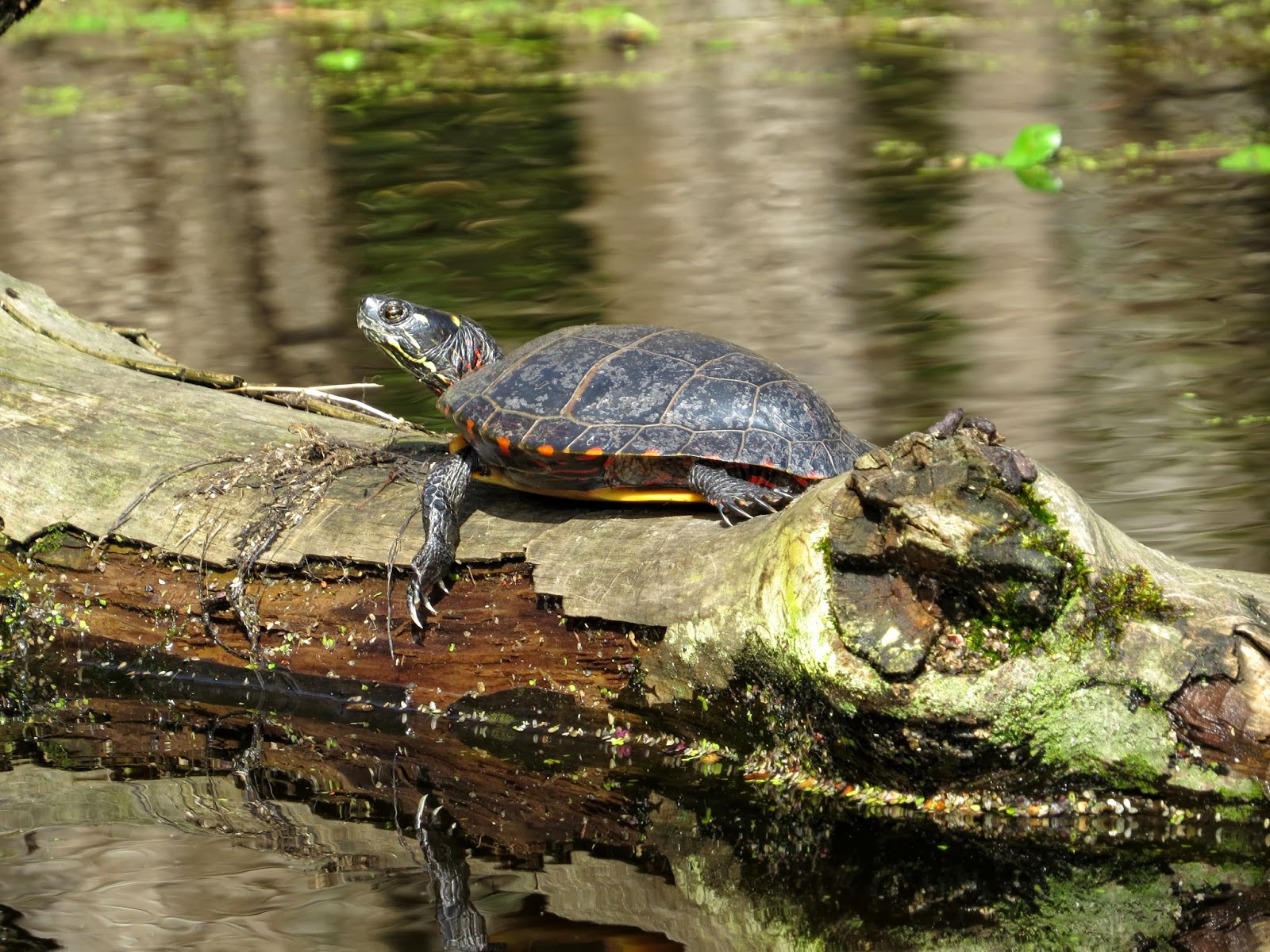 Draped ever so casually on this log, this male kept a wary eye on us.  I'm pretty sure it's a male because of those long claws on the front feet. If I had seen its tail, I could say with more certainty. 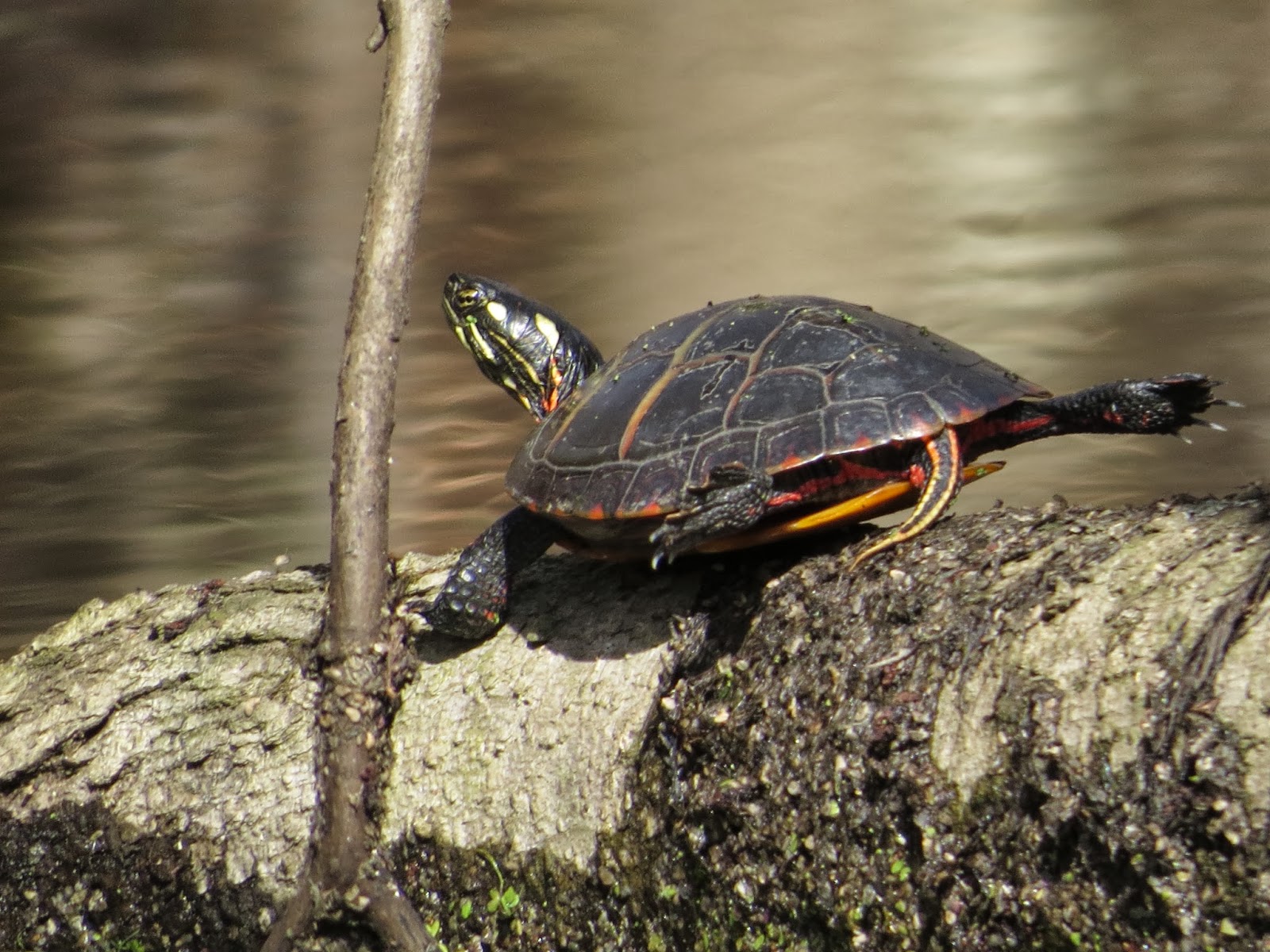 This one was serious about maxing out its surface area to sun ratio.

We also happened upon this busy fellow
in the same little gut as the Painted Turtles. 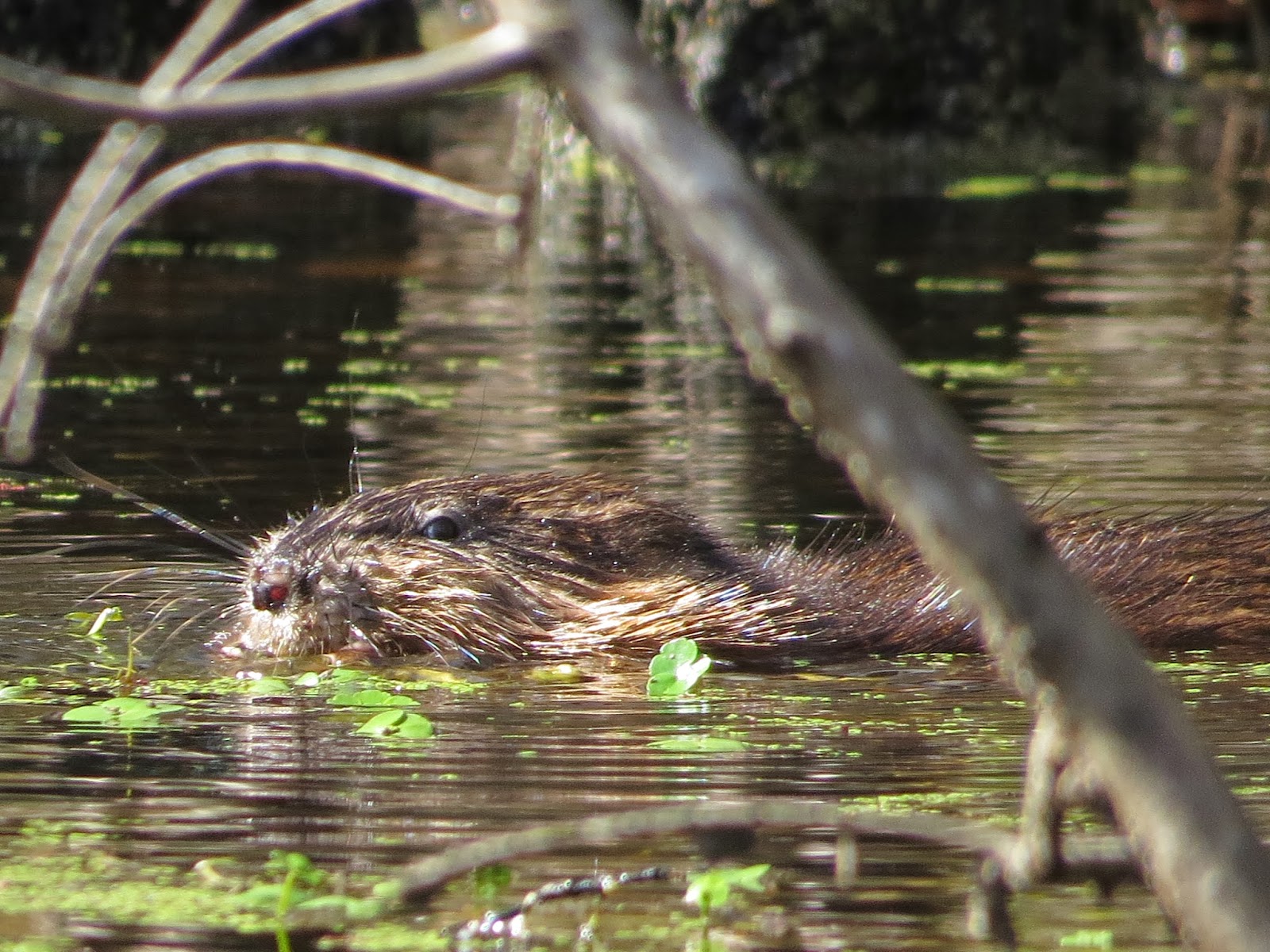 It's a muskrat, Ondatra zibethicus.

We saw many other creatures enjoying the respite from the cold but I've run out of time to share them today.  Our break was all too brief and it seems we're back in the deep freeze for the next few days.  When time and Mother Nature allow, I'll head back out to bring you some more images from this place we so love.  If you've enjoyed learning about our little corner, please visit again!

swamp4me
North Carolina, United States
"It's not what you look at that matters, it's what you see." -- Henry David Thoreau